Locations: Dublin and The Midlands.

Availability: Every evening from 6.00pm    Holidays: Nothing scheduled. 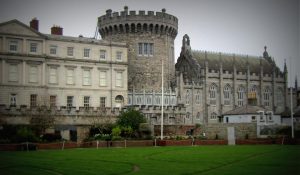 To understand something, you need to know its origin story and for Dublin it all began here. Starting with the Vikings (840 AD) overwintering their ships on the dark pool, Dubh Linn, the strategic importance of the raised site was fully realised with the Norman Castle built by the English King John in the early 1200’s.

After a major fire in 1684 the Castle was remodelled but still retains one full tower. For over 700 years this was the seat of English rule in Ireland, a dark place for the Irish with the walls adorned with the heads of rebellious Gaelic Chieftains. The courtyard bore witness to trial by combat and survived several Irish Rebellions until the Castle was handed over to Michael Collins and the Irish Free State in 1922.

What I like is being able to walk freely in this former stronghold and demonstrate how it served as a place of fear and repression from the bayonet marks at the Guard room to the holes in the scales of justice and where three IRA volunteers were murdered on Bloody Sunday 1920.

Book an Event in Ireland